Another trugful of tomatoes from the greenhouse, too many to enjoy raw, have been processed for the freezer.

In previous years I’ve used two methods of preparation: I score the skins of the larger tomatoes, immerse them in boiling water for a minute, then drain them and peel off the skins. Roughly chopped, with the hard stems removed, I bring them up to a simmer on the hob, then leave them to cool before bagging for the freezer in 400g portions, to be used in place of tinned chopped tomatoes through the winter.

The cherry tomatoes, I usually halve and arrange on baking trays, cut side up, before drizzling with olive oil, sprinkling with herbs and slow-roasting at a low temperature. I then press the resulting sticky tomatoes through a sieve and discard the skins and seeds, while cooling, bagging and freezing the lovely sweet smooth puree that makes it through the sieve. 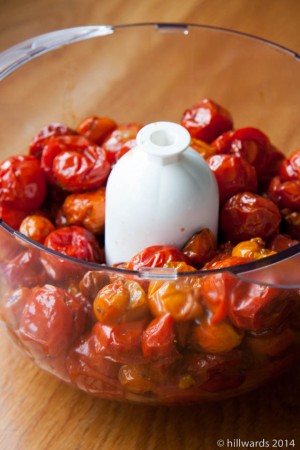 This year, though, I have rather lazily been roasting our cherry tomatoes whole (in a fan oven at 130C for two-and-a-half hours) and then blitzing them in the food processor. So much quicker and less wasteful than halving and sieving them, yielding greater quantities of purée that is still smooth, sweet and full of flavour. 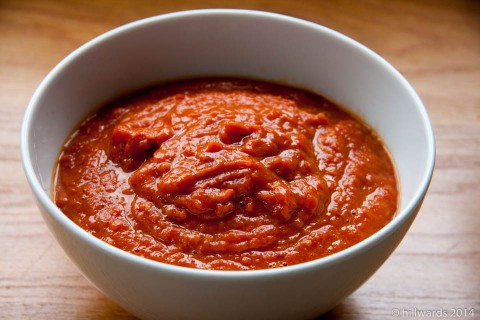 This evening I also added a tray of the larger tomatoes alongside the latest batch of cherry fruits, chopped in half and arranged on another baking tray cut-side up, then similarly drizzled with olive oil and sprinkled with dried oregano; all the roasted fruits combined for processing together at the end: such a quick and simple way to deal with another mountain of tomatoes.

I then couldn’t resist incorporating the freshly cooked sauce into my evening meal, stirring a few tablespoons through a bowl of Puy lentils and cooked spinach. A simple dish, just three ingredients, generously topped with grated parmesan, but packed with flavour. 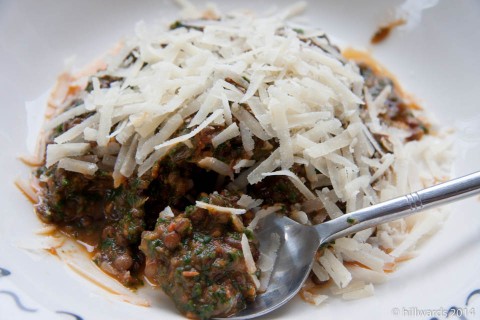 With no seasoning beyond the oregano on the tomatoes and a bay leaf in the cooking water of the lentils, the sweet tangy tomato sauce brought a wonderful depth of flavour to the dish. Not bad improvisation for a quick mid-week supper, if I do say so myself!

There's a road that leads you onward,
There's the road that lures to roam,
But the road I love leads homeward,
And hillward lies my home.